We are all familiar with ancient Greek statues, but what about modern Greek art?  Greece has many known artists and sculptors, also internationally known.
So, here you will learn about the most-photographed, iconic (and Instagrammable) contemporary Greek statues of the last 5 years!

Let’s discover more about the  installations by artists Costas Varotsos and George (Giorgos) Zongolopoulos in Athens, Thessaloniki and not only…

If you have visited Athens, you might have seen one of the most iconic statues of the Greek capital, Dromeas by the renowned Greek artist Kostas Varotsos (gr. Δρομέας, en. the runner). It is located opposite the Hilton hotel on Vasilissis Sofias Avenue and the National Gallery

How did Dromeas come to exist? 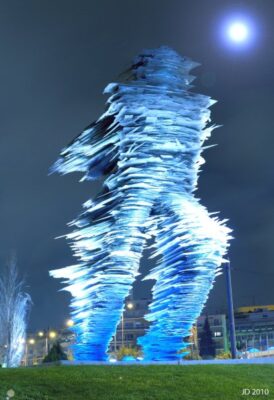 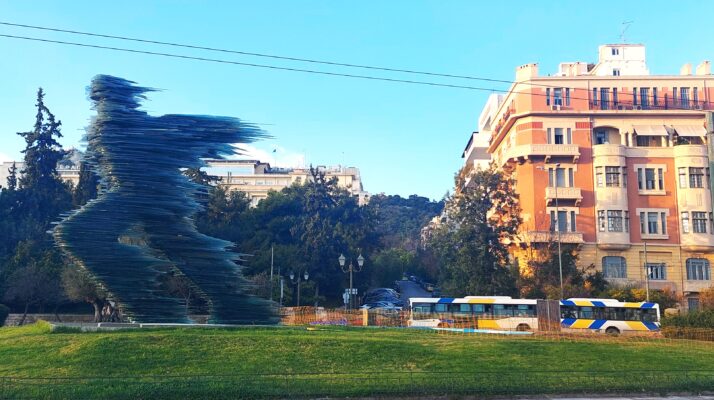 Initially, the statue was commissioned for the Omonia Square in central Athens, where it was placed once it was completed in 1988. It is a massive and imposing construction: it is about 8 metres tall, and it is made with thousands of sharp, jagged pieces of glass stacked on top of each other. The statue is constructed in a way that allows the glass to interact with natural and artificial light as well as water, making it one of the most photographable sights in Athens.  In 1994, the Dromeas was moved to its current location due to the construction of the Athens Metro and the overall redevelopment of the Omonia Square.

Dromeas was a very modern, very progressive piece of work and probably one of the first pieces of modern art to be commissioned in Greece for display in public. As a result, it led to a lot of heated discussions and debates, but nowadays it is synonymous with the modern city centre of Athens.

Dromeas was not the statue’s initial name!

Interestingly, its initial title was Ξένος (ksenos, en. stranger, passerby). Omonia Square was (and remains) an area of the city buzzing with life and energy and Varotsos was inspired by the image of thousands of locals passing by the square in a rush. According to his approach, people in urban environments could be surrounded by crowds but remained alone and strangers to each other. However, at that time most Athenians interpreted the massive figure as a runner, which is how the statue’s current name came to exist.

In addition to this, the route of the annual classical marathon race, which takes place in November and starts at the village of Marathon and ends at the Kalimarmaro stadium, passes in front of the statue. So the name runner is a great fit as it inspires marathoners to keep running!

Costas Varotsos was born in Athens in 1955. He studied architecture at the University of Pescara in Italy and then he continued his education studying modern art at Rome University of Fine Arts and the Fulbright Grant University in New York. Ever since his return to Greece, Varotsos has worked both as a sculptor as well as a professor at the School of Architecture in Thessaloniki.

Varotsos has been a very prolific artist and we can find his works not only in Greece but also in many European and US cities. If you are planning to visit the island of Syros this year, (and if you want to learn Greek, then the Omilo Greek language courses take place in Syros between July and September), consider yourself lucky because you will be able to see one of his most recent works with your own eyes!
Orizontes (en. horizons) is a large, impressive creation made with metal and glass and is located at the seafront of Hermoupolis, the island’s capital.

According to the artist, “the power of art and culture can band together the local community of Syros and become the springboard to expanding our own horizons as well. 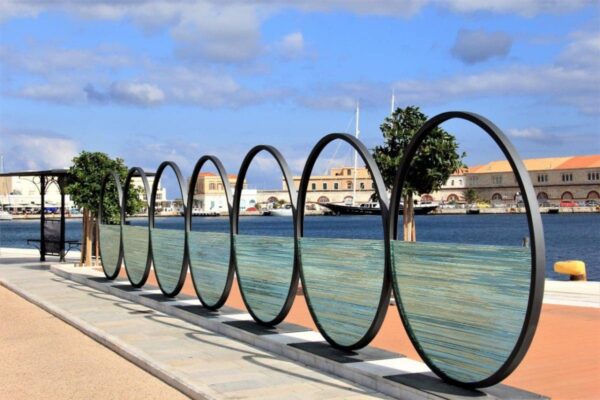 …to the beautiful city of Thessaloniki, also known as the co-capital of Greece. If you have visited Thessaloniki (or are planning to), you have probably promenaded across Thessaloniki’s seafront. There you will find Umbrellas by George (Giorgos) Zongolopoulos, the famous 13-m high, stainless-steel sculpture – one of the most important reference points for the public space of Greece. Both locals and visitors love to photograph the Umbrellas and, as a result, Instagram is full of beautifully taken photos of the sculpture during all times of the day (you can check them out by searching for the hashtag #thessalonikiumbrellas). 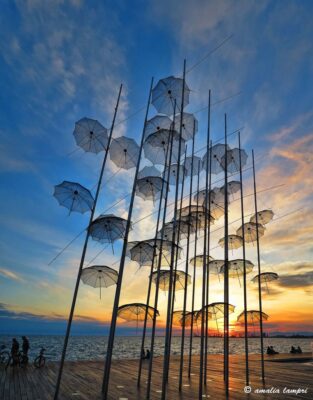 George Zongolopoulos, the “eternal teenager” as he was called within the artistic circles of his time, was an important Greek sculptor, painter and architect. He was born in Athens in 1903 and studied at the Athens School of Fine Arts. Between 1930-38, he worked as an architect in the Greek Ministry of Education, then he resigned to devote himself to his art. In 1939, he went to live in Paris because he received a scholarship granted by the French Government at Marcel Gimond’ s studio. Ever since and until the late 1990s, he split his time between Greece and Paris, where he kept a studio with his wife Helen (also an artist), whilst attending and participating in international events. Zongolopoulos continued creating non-stop throughout his life and his work has been exhibited in major public spaces in Greece, Europe, and the US, as well as in modern art collections and museums.

He represented Greece 11 times in the Biennales of Venice  from 1940 until 2001. This is also where, in 1995, he exhibited the Umbrellas for the first time. The sculpture was then installed in Thessaloniki in 1997, the year that the city was the European Capital of Culture.

More umbrella-themed installations can nowadays be found in Psychiko (Athens), Egypt and Belgium!

Do you have a favourite modern Greek artist? Let us know in the comments below.

If you are as excited about modern Greek art as we are, then you will love visiting more museums in Greece.

the  National Gallery in Athens,
the Museum of Contemporary Art (EMST) at Sygrou-Fix,
and
the renovated Former Public Tobacco Factory in Sepolia.