The Athens Classic Marathon is one of the most important sports events hosted by the city of Athens. Thousands of runners from all over the world participate in every year’s race. Apart from the sportive event, they have the chance to enjoy Greek hospitality, to discover the fascinating landscape and to explore a city which is constantly improving its standards.

Due to covid, the marathon did not take place in 2020, but happy to announce that on November 14th, 2021, Athens will be ready to welcome all the runners again.

Every year, friends from all over the world participate in the Athens Marathon and enjoy every minute of it! Those friends usually also ran other marathons before, in other countries, but from their sayings, it seems that the finish line in the Panathinaiko Stadium in centre Athens, is really the cherry on the cake,  very rewarding, beautiful, and touching.

Even when you are not an Athlete, like me, it is interesting to read about the history of the Marathon, and cheering along the 42 km is always an adventure. I personally love this event a lot, and get very emotional to see how many runners from all over the world join forces and create an amazing atmosphere.

The Marathon Race has its roots in Antiquity. It all started since the Persian wars, when the Persians tried to occupy the Greek cities. One of the most important battles in Greek history took place in Marathon, northeast of Athens, in 498 BC. In this crucial battle, the Athenians managed to defeat the Persians, who normally were much stronger. Following the legend, the soldier Phidippides was asked to run from the battlefield to Athens, in order to announce their victory. He ran 42,195 kilometers from Marathon to Athens without any stop. As a messenger, he also had to run armed. As soon as he entered the assembly, he cried out “we won” and immediately after that he fell down and died.

Many centuries later, the marathon race was established in honor of Phidippides, and now you also know the reason why all the marathons around the world are called ‘marathon’ and are 42,195 kilometers long!

Some facts about the Athens Marathon

This race did not exist during antiquity. It was established during the first modern Olympic Games, organized in Athens in 1896. The French Professor, Michel Bréal , is credited with the idea of the marathon race. He was also a friend of Pierre de Coubertin, who proposed the revival of the Olympic Games. The winner of the first Marathon was Spyros Louis, a water carrier from Maroussi (you can find a statue of him in the Municipality of Maroussi (*) , in North Athens, and the Maroussi municipal sports complex is also named after him).

The route from the village of Marathon till the center Athens

Today the Marathon race is held in many major cities around the world, but there is only one “Authentic Marathon”, taking place every year in Athens, beginning of November. The starting point is in Marathon itself, a small village. At the 5th km, the athletes make a loop and run around the Marathon Tomb (a monument to honor the soldiers killed in the Persian battle) and then continue onto the Marathon Avenue, connecting the village of Marathon with Athens. The route passes through many municipalities: Nea Makri, Pikermi, Pallini, Agia Paraskevi etc. The last kilometer of the route the runners pass from the Vassilissis Sofias avenue, where athletes run along the American Embassy, ​​the Megaron Concert Hall and the National Gallery. The finishing point is at the Panathinaiko Stadium or Kallimarmaro, the beautiful stadium where the first modern Olympic Games took place in 1896. 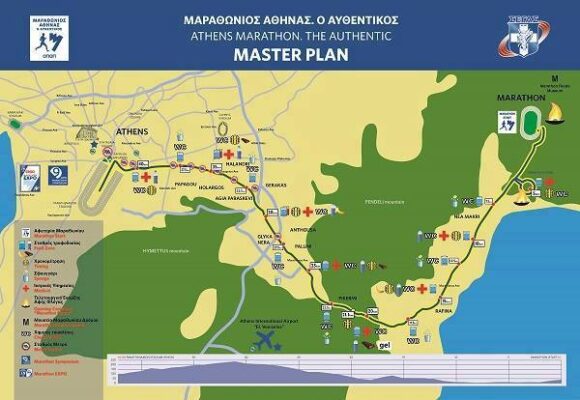 Click here to watch a video, and get in the mood to run next year 🙂

Simultaneously with the marathon run, also other events take place: 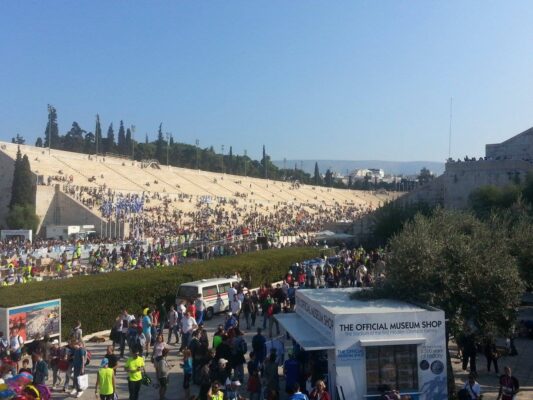