Maroussi – A North Athens Suburb, and  residential area with a “neighborhood” feel.
Maroussi, is situated 15 km northeast of the Acropolis (centre Athens), and very close to Kifisia (the last metro station of the Green metro line, and nice historical suburb).
Maroussi might feel a bit far from the historic center of Athens, but, luckily, it’s well connected. From Atthens center it usually takes around 25 minutes using the green metro line 1, bringing you straight to the metro stations Omonia, Monastiraki and Thisseion, in central Athens.

The municipality has an area of 12.938 km2 and is the biggest municipality in the Attiki area. The built-up area of Marousi is continuous with those of the neighboring suburbs Pefki, Kifisia, and Vrilissia.
Within Marousi municipality, lies the biggest forest in urban Athens, “Dasos Syngrou” (also “Alsos Syggrou” – more info below). 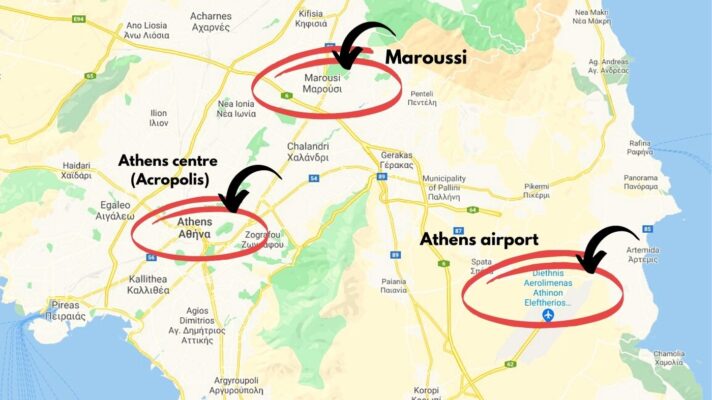 So, in general, a very nice area, very conveniently located, with easy access to everything you need on a daily basis.
Marousi is also a quiet and family-oriented neighborhood, a little suburban “village”. The flats and houses tend to be big, modern and relatively new. Marousi has plenty of green spaces as it’s full of trees, small parks, squares, picnic areas, etc. Some areas close to the station are pedestrianized so people can move around more freely when doing their shopping, having a walk or visiting the open street market on Saturday morning.

Click here to see a video, recorded at the weekly market on Saturday, in February 2021, and with music 🙂

All those metro stations are both on the green metro line, so easily accessible if you’re traveling back and ford to Marousi. 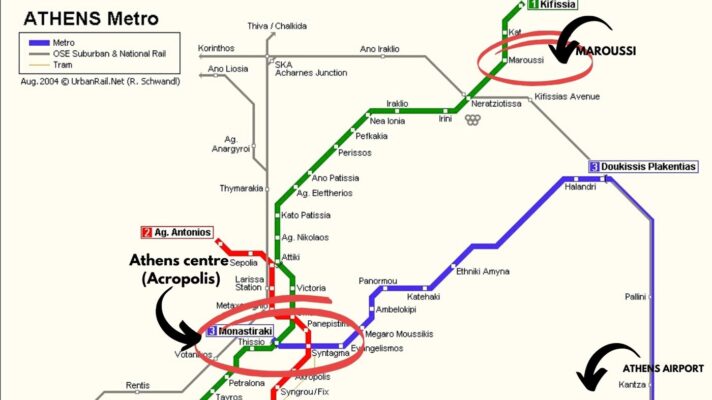 Click here to see a video of a street artist, singing at the entrance of the Maroussi Metro Station

The Olympic Stadium in Maroussi – OAKA 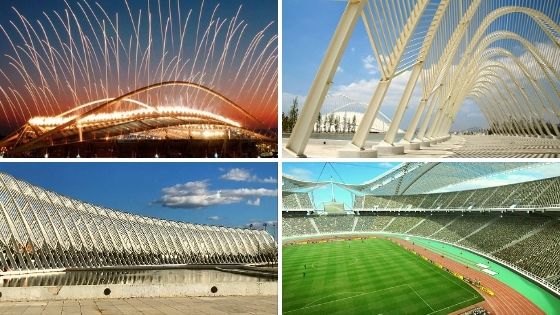 The Olympic stadium, where the Olympics of 2004 took place, is also located in Maroussi. Most of us remember this event very well, since the entire Athens changed when the Olympics took place.
However, this stadium already has a long history, since it was originally designed in 1980 and was builtin 1980–1982, in order to host the 1982 European Championships for Athletics.  One year later, in 1983, OAKA Stadium hosted the 1983 European Cup Final and many others the following years.  The Olympic stadium is a UEFA category four stadium and is the largest stadium in Greece.

In 2004 the stadium was extensively renovated in time for the 2004 Summer Olympics as well as the Paralympics. It was redesigned by the known Spanish architect Santiago Calatrava, including a new roof designed by the architect. The roof was added atop the sidelines and completed just in time for the opening of the Games. The stadium was then officially re-opened on 30 July 2004 and also hosted the opening ceremony on 13 August 2004, the closing ceremony on 29 August 2004, as well as the Paralympics ceremonies in September 2004.

The Olympic Stadium nowadays is the home field of three famous football clubs of Athens, namely Olympiacos, Panathinaikos and AEK Athens. The Greek government owns the Olympic stadium, and also concerts are frequently organized on this premises.

Although after the Olympics, unfortunately, the government did not maintain the areas around the stadium well, it looks a bit deserted, and the amazing atmosphere, fountains and lights which were in place during the Olympics, do not work anymore.
However, many youngsters, adults, and families use this area every day for walking, skating, swimming (there are several swimming clubs using the Olympic Swimming pools), biking, etc…and it is still a nice place to hang out from time to time.

Did you know that the northern suburbs of Athens have a beautiful park? One of the biggest parks in the Attiki area, also is located between Marousi and Kifissia, and called “Syngrou Park”.

The park has an area of 950 acres which houses greenhouses, crops, parking, a school for agricultural education, the neoclassical Villa Sygrou and the church of St. Andrew (built by Ernest Schiller, it is the only Orthodox Gothic-style church in Greece).

The park has a rich network of dirt roads and different paths, some surfaced, some narrow footpaths, between fruit trees, pine trees, etc.

The land belonged to Andreas Sygrou, a successful and wealthy businessman. After his death, the park passed to his wife Iphigenia Sygrou, who lived in the park‘s villa for 20 years. After the death of her husband, Iphigenia Sygrou built the hospital Andrea Sygrou, made donations for the construction of the water supply system of Athens and the construction of the avenue A. Sygrou. She also donated the park to the Greek Agricultural Company.

Today a variety of seminars are taking place in the park: seminars of oinology, floriculture, of horticulture, of gardening, beekeeping etc. It is one of the best places for walking, cycling or even for a picnic in the heart of the city! Syngrou Park is best described as an area of unspoiled countryside where people can forget for a while that they are near the center of the capital city.

Accommodation in Maroussi of Kifissia

Are you interested to experience “life in Athens” for a period, while working from your “new home” with “new neighbors”? Are you a digital nomad, and looking for a nice place in the capital of Greece, in a Greek area without tourists around?

Then we can suggest to search for an aibnb in Maroussi or Kifissia, close to the metro stations Maroussi , Neratziotissa or KAT,or Kifissia so you can also easily to commute to centre Athens.

Interested in learning Greek in Maroussi? The Omilo Greek Language and Culture school offers 1-and 2-week courses , as well as private lessons, in Maroussi, at 300 meters from the metro station.
(between October and June)
Click here for more information