Just in case you are curious, here a small introduction about how this Blog and eShop “masaresi” came to life, and how my “adventure in Greece” started in 1993!

Being 1.78 m tall and blond, I am always looked at as the “foreigner in Greece”. Even when I might not feel like that after living most of my life in Greece, it is actually correct!  I was born and raised in Belgium but left the country when I was 26, to live on different continents and explore other cultures. However, my travels eventually led me to Greece, where I stayed.

It was back in 1996 when I was walking with my husband on the beach in Marathon, 42 km from Athens center. We were enjoying the nice sea views, as well as the views on the mountains of Evia, the cool breeze and our conversation about “the benefits of living in Greece”! At that moment I lived for 3 years in Greece, and after a tiring week working for a major European tour operator, this positive chat was a welcoming change!  A change to the constant flow of tourist complaints I was hearing back then:  “the hotel rooms are too simple, they do not serve schnitzel in my hotel,  I can’t order French wine, they only speak Greek, there is too much wind, Athens is too hot…”.

When you speak many languages it is (was!) easy to find a job in tourism. However, after three years I had realized the tourist sector was not what I expected it to be, since most tourists just demanded to have the same things as back home, but then accompanied by sun and sea-view! It proved to be an impossible task to change their complaining attitude or to introduce them to Greek culture, no matter how much I tried!

So, during that walk along the seaside in Marathon, I decided it was time for a change!  I wanted to work with different people, people from all over the world interested in Greece, the Greek language, and the Greek culture…even when it rains 😊

My professional background is in languages.  I attained a university degree in translating and interpreting from the University of Antwerp and worked for Language Schools in Belgium and the USA.  During my university studies, I met my “future” Greek husband, Dimitris, on an intensive language course in Denmark!  And since then, my passion for Scandinavia changed for Greece!

I was not interested in just being a “tourist” in Greece but was looking forward to adapting to a new country.

In Greece, you can never get bored:  the Greek people, the culture, the music, the language, the philosophy, the history, the art, the food, and nature keep impressing me every single day!   But what a pity I could not share that passion with more people, showing them the “real Greece” or even motivating them to “learn Greek”. At the same time, Dimitris was also ready for a career change and looking forward to focusing on the positive sides of Greece.  And this is how it all started…in 1996 we created, founded, Omilo Greek Language and Culture;  a perfect way to combine the things we love in one of the most beautiful countries on earth!  Something we were dreaming about since we were students…

So during the next months in 1996, before the internet or google even existed, we sat together and worked out various programs, looked for nice course locations and contacted some amazing and enthusiastic Greek teachers.  We kept dreaming about how nice it would be to welcome people from every corner of the world to Greece and teaching them the secrets of the Greek Language and Culture. Hence “OMILO” was born… be careful, it is not “Omilos” (»όμιλος») (meaning club/association) as many Greeks spontaneously think, but….”Omilo ”…from the Greek verb «ομιλώ» or “μιλαώ» which means “ I speak”.
When in Greece, it is important to “speak” and “communicate” with Greeks, to get the real feeling and enjoy your stay even more!  The first Omilo course was organized in July 1997.

We realized that a new chapter had begun for us. From 1997 till today we have successfully been organizing courses in various locations in Greece including Nea Makri, Limni (Evia), Nafplion and the islands of Hydra, Syros, Andros and Lefkada. Nonetheless, till of today, Omilo is still expanding and constantly looking for new locations. Why? Because of the desire to show our students the endless beauties of Greece.

Fortunately, Dimitris, after attaining his bachelor degree in Greece, also obtained an MBA-degree from the USA, which proved to be very helpful in starting this adventure back then;  dealing with the financial planning over the last decades, surviving a very difficult business reality in Greece, a major Greek financial crisis and heavy taxation for many years and more recently,  the “corona year”.
Maya had different tasks over the years, but since the internet took over the world,  her main job became Omilo’s website, newsletters, social media, marketing, YouTube channel, emails, etc…

Now, after 25 years of Omilo, I felt it is time for a change once again.  I now feel I am ready to use the benefits of the internet, to also reach those loving Greece, but not able to visit Greece on a regular basis.   Apart from languages, my major interests have been always “creative and cultural tourism” as well as “art”, in every sense of the word!  I forgot to mention that after my language studies in Belgium, I moved to the USA for a master’s in Arts Administration.  The time came to focus a bit more on my other interests, but always in combination with Greece.

This being said, Dimitris continues running Omilo, and Maya will be now mostly occupied with developing Masaresi 😊
We both keep supporting Greece, as well as promoting the “real Greece”, but we will go separate ways in our professional lives.

Whether it is art, music, language, cultural holidays, accommodation, history, online seminars, etc… as long it is related to Greece, I would love to advise you and share my experiences and feedback, as a foreigner living for most of my life in Greece, as well as having raised two children, now adults, in Athens.

Masaresi.com is independent of Omilo, and I am looking forward to promoting all kinds of services and products from different companies, schools, or freelancers in Greece.

My second Greek Adventure started, once again a new chapter I am looking forward to sharing with you.

PS. I forgot to mention one of the most important things;  thanks to my husband Dimitris, and our children Yason and Afea, this masaresi project is possible.
They inspire, motivate, and always support me.  Ευχαριστώ πολύ! 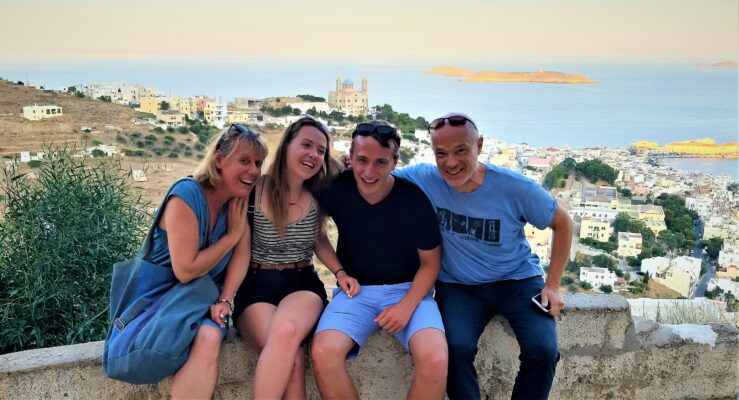 4 thoughts on “A Small Part Of My Story, In Greece”