When living in a foreign country, you will soon also get to know the humor or the famous comics of that country.
Arkas (Greek: Αρκάς) is the pen name of a popular Greek comics artist. His work has a very unique style and his comics are easily recognized by Greeks of all ages.

Here you can find some information about his career as well as a few examples of his work.
Do not worry, also English translations are added, to help you understand his humor better!

If you prefer to read this article in Greek, then click on the button below

Click here to read the article about Arkas in Greek

Arkas started publishing his work in 1981. His comics stand apart thanks to its unique style and its ability to combine serious current affairs, deep philosophical questions and humor. Arkas’ work appears in newspapers, magazines as well as websites, but has also been published in numerous books.

Each volume is structured in a similar way: individual strips that feature the same group of characters in different situations/locations. It’s very common for his stories to feature two main figures: one that is rational, down to earth and maybe a bit cynical, and one that is rude, vulgar 0or a bit silly. The latter one is usually the one to deliver the punchlines.

Arkas has been very common with his characters: they are often animals, like pigeons, cats or pigs, or angels and other figures from the Bible. As an artist, he follows closely what’s happening in Greece and around the world, so a lot of his comics comment, make fun or criticize current affairs. His humour is cheeky, bold and he’s not afraid to use vulgar language or innuendo.

Very little is known about Arkas as he rarely appears at comics conventions or book events. He’s rarely interviewed and thus remains a man of mystery. It is said that this is because he wants his work to speak for itself, rather than self-promote.

We do not even know his real name so the fans of his work have come up with different theories about his identity. According to fan rumors, he is a psychiatrist or a university professor.

Some believe that his pen name, Arkas, is supposed to show where he comes from and derives from the word Arcadia (Αρκαδία). Arcadia is a province of central Peloponnese. In Greek mythology, Arcas was a hunter who became king of Arcadia. He was remembered for having taught people the arts of weaving and baking bread.

Arkas has been translated into other languages and has become known outside Greece. Translations of his books can be found in English, French, German, Romanian, Spanish, Portuguese, Italian, Bulgarian, Polish and Serbian.

A few examples of his work

Humour is different from one language, especially when it refers to culture-specific things. And it’s even harder to translate! It offers, though, a great opportunity to practice your Greek language skills and understand a bit better how Greeks think (and what makes them tick)!

Here I have chosen a few examples of Arkas’ work. For those not speaking Greek, you get the help of the English translations below each image! 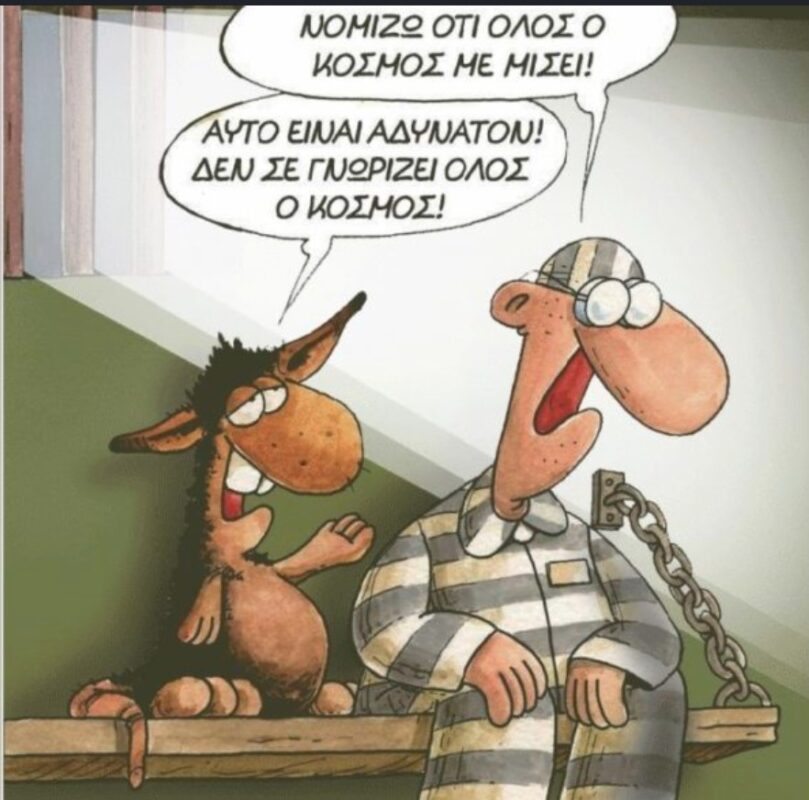 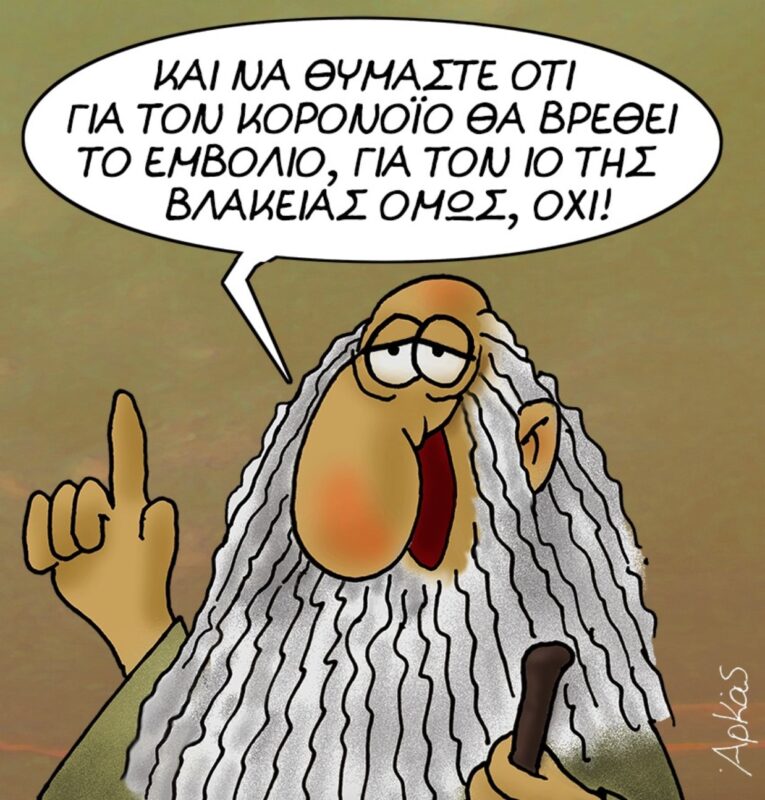 And remember that we’ll find a vaccine for coronavirus, however not for stupidity! 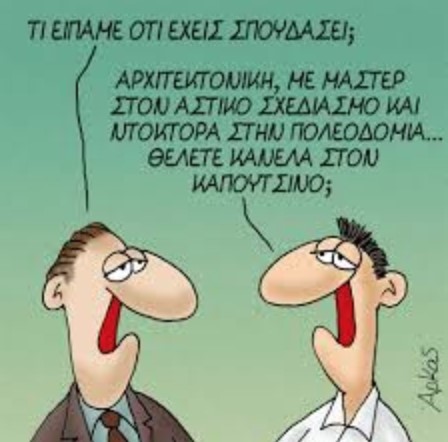 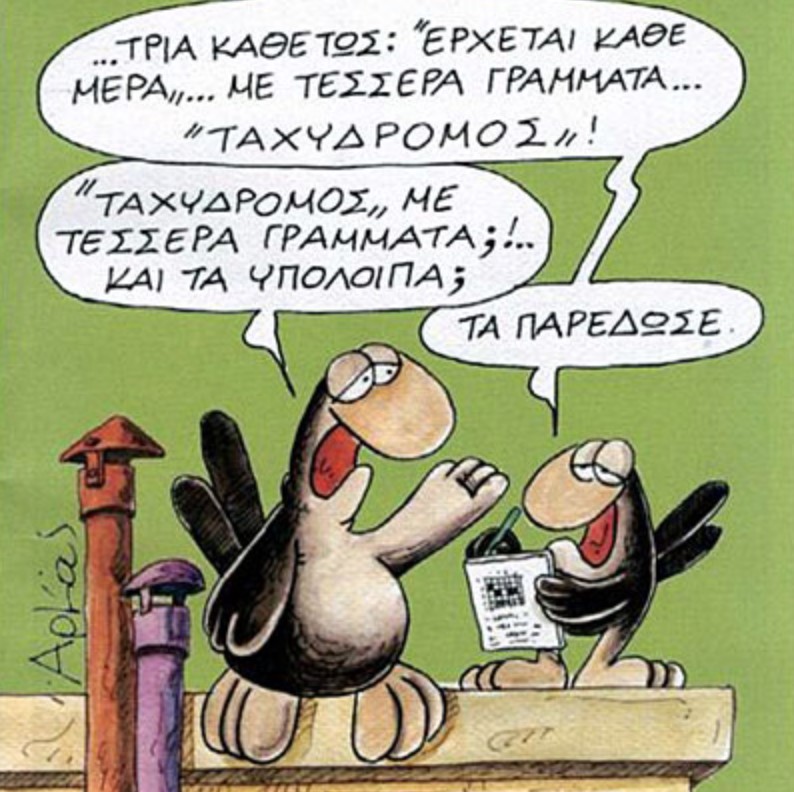 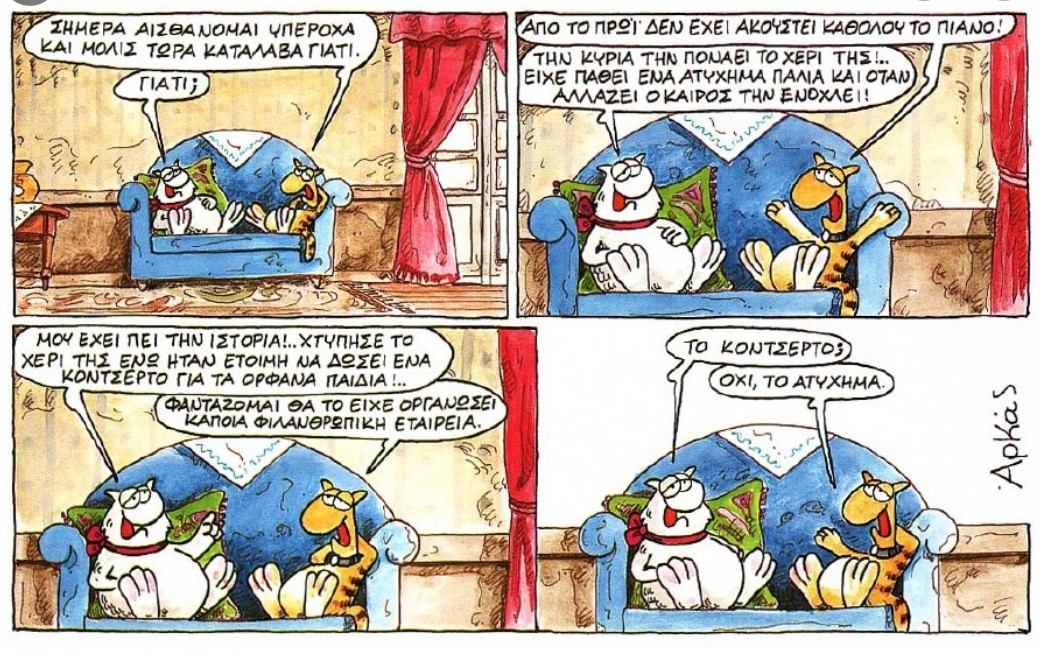 (Pair of two grumpy but very lazy cats whose owner is an elderly, eccentric lady. They have different personalities but they get along very well.
The white one is very fond of their owner whereas the brown one is fairly sarcastic and cynical as we’ll see in the conversation between them…)