Traveling within Greece, by car, bus, train or bike,  is a pure delight. Nature is of such stunning beauty, that you never know where to look first.
Apart from nature, you can also enjoy the amazing authentic village along your journey, or if you are traveling in the Peloponnese, do not forget to drive over the state of the art bridge in Patras. The Rio-Antirrio Bridge is one of te world’s longest multi-span cable-stayed bridges. It crosses the Gulf of Corinth near Patras, linking the town of Rio on the Peloponnese to Antirrio on mainland Greece.


The official name of the bridge is the Charilaos Trikoupis Bridge. Charilaos Trikoupis was a 19th-century Greek prime minister; he suggested the idea of building a bridge between Rio and Antirrio. The project was too expensive at the time when Greece was trying to get a late start in the Industrial Revolution.
The bridge was finally inaugurated on August 7, 2004.

The 2,880 m long bridge (approximately 1.8 miles) very much improves access to and from the Peloponnese, which could previously be reached only by ferry. The bridge has two vehicle lanes per direction, an emergency lane, and a pedestrian walkway. Its five-span four-pylon cable-stayed portion of length 2,252 m is the world’s second-longest cable-stayed deck.

This bridge is widely considered to be an engineering masterpiece, owing to several solutions applied to span the difficult site. These difficulties include deep water, insecure materials for foundations, seismic activity, the probability of tsunamis, and the expansion of the Gulf of Corinth due to plate tectonics.

Due to the peculiar conditions of the straits, several unique engineering problems needed to be considered. The water depth reaches 65 m, the seabed is mostly of loose sediment, the seismic activity and possibility of tectonic movement is significant, and the Gulf of Corinth is expanding at a rate of about 30 mm a year. For these reasons, special construction techniques were applied.

The bridge was planned in the mid-1990s. Site preparation and dredging began in July 1998, and the construction of the massive supporting pylons in 2000. With these complete in 2003, work began on the traffic decks and supporting cables. The bridge was inaugurated on August 7, 2004, a week before the opening of the 2004 Summer Olympics in Athens. Olympic torchbearers were the first to officially cross its length.

If you do not have the opportunity soon to travel within Greece and cross this beautiful bridge, then take a look at this video, and get the impression you are actually in your car, crossing the bride 🙂
Click here to watch the video.

tip 1 : if you would like to enjoy the bridge, even more, then you can also take the ferry from Rio to Antirrio. It is a short journey of about 40 minutes, which gives you the opportunity to sail along the bridge, relax, have your coffee and take beautiful pictures! That is what we usually do ourselves, when not in a hurry! 😎 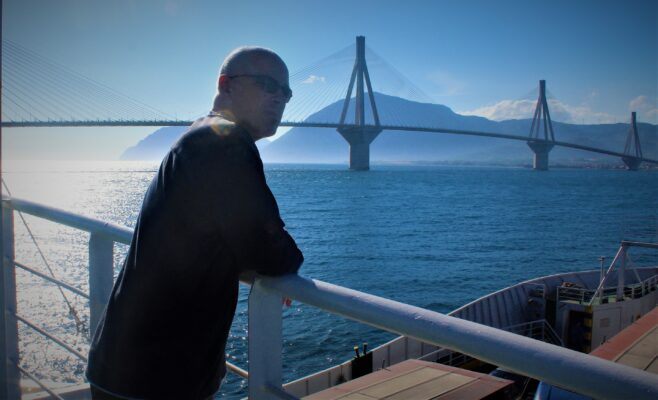 Tip 2: When flying from or to Greece, towards Northern Europe, the plane often passes from this point, and gives you a beautiful view on the bridge. (if you sit at the right window:)
I have been very lucky to have the opportunity to see it several times. The best photo I could ever make, with my smartphone, is the one here below. 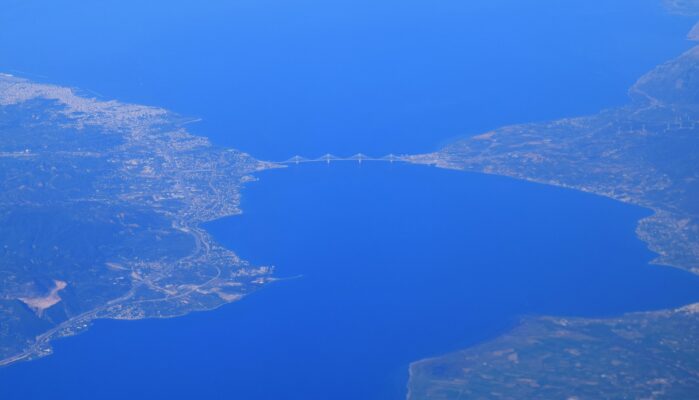