The Greek mythology stories are some of the most famous in the world: from Hercules’ labours to the voyage of Odysseus, Jason’s quest for the golden fleece to the start of the Trojan War, these stories have long outlasted the civilisation that created them. They are still popular nowadays, as well as in Hollywood, were they are often used as an inspiration to create new movies.

There were many more than 12 Gods in ancient Greece or Mythology, but the 12 gods and goddesses dominated myths and worship: the Twelve Olympians, who were living on the Mount Olympus.
The Olympians gained their supremacy in a “war of Gods” in which Zeus led his siblings to victory over the “Titans”.
Hades, the god of the underworld, was viewed as important but is not included in this list as he did not reside on the legendary Mount Olympus.

How many Olympian gods are there?

The ancient Greeks didn’t create a “Top Ten” list of Gods – but they did have the “Top Twelve” – those 12 Gods were living on the highest mountain in Greece, the Olympus.
However, the ancient Greeks did not have a just twelve gods, but there were big and smaller gods and others that were worshiped locally, e.g. Zeus, Poseidon and Hades were the greatest gods,

Not only this mountain is known in Mythology, but it is actually a real mountain, loved by many mountaineers and walkers.
Mount Olympus sits on the border of the regions of Thessaly and Macedonia. The easiest access to the mountain and its trails is from the tourist village of Litochoro, at the base of the mountain. It is about 1 hour driving from Thessaloniki, or 5 hours driving from Athens.

Of course, it’s no surprise that magical stories grew up around Mount Olympus. since it rises almost straight from the Aegean Sea to a height of 2917 meters (that’s 9570 feet ), making it the tallest mountain in Greece and the second tallest mountain in the Balkans. Its lower slopes are broken by narrow, densely forested gorges marked by waterfalls and caves where lesser gods and other spirits were said to live.
Its peaks – and there are 52 separate peaks – are snow-capped for 8 months of the year and often hidden in the clouds the rest of the time.

In 1938, 92 square miles covering the mountain and the surrounding area, became the first Greek National Park. This was in recognition of the area’s extraordinary bio-diversity.  In 1981 UNESCO classified the region as the Olympus Biosphere Reserve. It is also included in an EU list of the most important bird areas of the European Community and is currently on a tentative list of UNESCO World Heritage sites.

If you are an experienced mountaineer, hiking to the summits of Mount Olympus is not difficult. However, many visitors seem to underestimate the challenges and try to hike the mountain unprepared and without a map. Every year, there are mountain rescues and fatal accidents on the Olympus, so be careful!

Curious what can happen on mount Olympus? Then listen to the podcast story #14, of the Omilo Easy Greek Podcast Stories.

Click here  to listen to the video with subtitles in Greek.

If you prefer to also have the English translation of the text, with vocabulary list, grammar excercises and background info about Greece,
then click here to find its Companion Notebook of Podcast story 14. 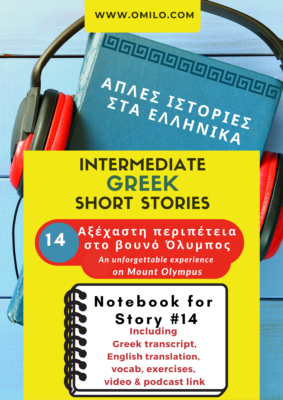 Who are the 12 Olympian Gods? 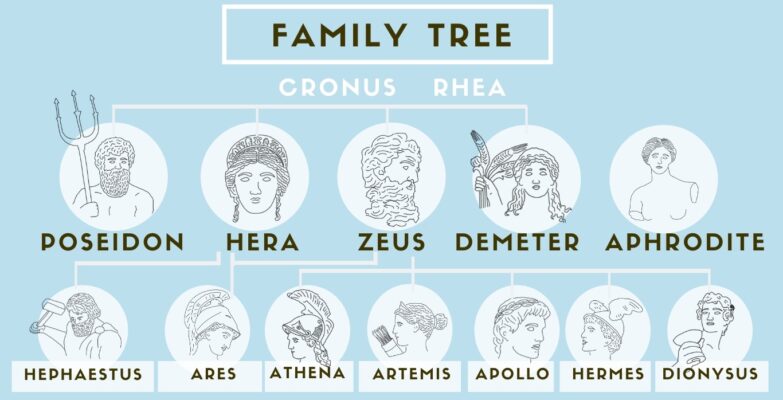 Zeus, king of the gods, was the most powerful of all the those in Greek mythology. Son of Cronus and Rhea, he defeated his father Cronus and released his siblings from his belly. He was often called the god of lightning and thunder because he controlled the weather but was also known for being the god of justice. He is often depicted with a lightning bolt or a sceptre.

While he married his sister Hera, he was also known to be a prolific adulterer, bearing children with both other goddesses and mortals. One of the most important statues of Zeus can be seen at the National Archaeological  museum in Athens.

You can visit the temple of Poseidon in Sounion, Attiki. Click here to read more about this amazing temple,

Queen of the gods and wife and sister of Zeus.

Hades is also an important god and the brother of Zeus and Poseidon, but was not generally considered to be one of the twelve Olympians since he dwelled in the underworld. Similarly, Demeter’s daughter Persephone is also omitted from the list of the Olympians, though she dwells there for one-half or one-third of the year, depending on which mythological interpretation is preferred.

While in general today everybody  thinks of  the “12 Olympians”, there was a smaller core group of just six who were the children of Cronus and Rhea – Hestia, Demeter, Hera, Hades, Poseidon, and Zeus. In that group, Hades is always included.